Give Up On Me is Available Now 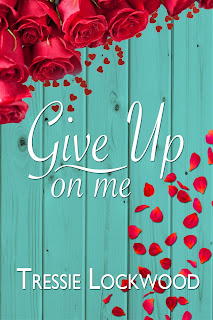 Janae and Matt's relationship is perfect. Nothing could be better between them. Even Janae's fear of marriage doesn't get in the way because Matt won't allow it. Janae's never met a man more devoted to her, and seeing the love he feels for her in his baby blues is all she needs to tell him yes.

Unfortunately, there's not just Matt and her feelings to consider. Matt happens to be the grandson of a cold-hearted old woman who thinks Janae's not good enough for him. Margaret and Matt's brother will do everything they can to force Janae out of Matt's life. When they go too far, the beautiful relationship Janae and Matt had is left in ruins.

Janae has a decision to make. A lot of people's livelihood and one person's life itself is dependent on what she chooses to do. What she wants more than anything is to stay with the man she loves, but that might not be an option.
Posted by Tressie Lockwood at 4:23 AM 2 comments: