With His Touch is the sequel to The Way Back. This is Jamie's story. Jamie started to think he was missing something when he watched Keon get a wife and start having kids. There should be someone perfect for him, and he shouldn't have a problem picking her right out since he did it once for his buddy. Only Jamie's girl isn't who he or anyone else would think. Cabrina is a little rough and a lot of innocence. 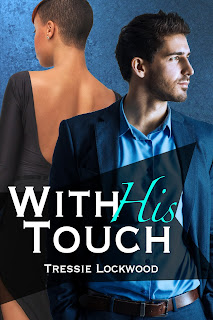 GET THE BOOK HERE

Cabrina Barnes has had to fight to survive. From as far back as she can remember her father and brother have been abusive and cruel. When her mother died, she fled the home where she grew up. She learned self-defense and carries a weapon for protection. While she won't let a man get too close, she dreams of something more. A real family feels like an impossible dream. Then she meets Jamie.

Jamie Westgate feels a little jealous of his best friend. Keon has found love and a family, but Jamie is still alone. He's got money and success, but it means nothing without someone to share it with. From the first day he meets Cabrina, Jamie loves her.

Everyone thinks Jamie's crazy, especially because Cabrina is clumsy, ignorant, and blunt as hell. The day they meet, Cabrina pulls a gun on him. He doesn't know if she's manipulating him or if she's truly as vulnerable as she seems. Regardless of Cabrina's motives, once Jamie rescues her from danger, he won't let her go—even if she fights him all the way to the altar.


Posted by Tressie Lockwood at 4:20 AM No comments: